Finally a Place to “come * Live / Work / Play / Learn * go!”
After over 20 years of effort and planning, in August 2012, Palm Beach County executed a contract with Transit Village, LLC permitting a mixed use transit oriented development in downtown West Palm Beach. Transit Village has obtained many federal, state and regional approvals. While significantly promoting mass transit use, Transit Village’s blend of urban design and development economics will incorporate all modes of transportation, being just a traffic signal from I-95, less than 3 miles from Palm Beach International Airport and directly above and surrounding the recently completed West Palm Beach Intermodal Transit Center. In addition to capitalizing on these transit modes, Transit Village will be just a very short walk to:

To create this exciting TOD, Transit Village has received the support and obtained approvals and agreements from many federal, state, and regional governmental agencies and authorities, including the Federal Transit Administration, the Florida Department of Transportation, the Florida Department of Environmental Protection, the South Florida Regional Transportation Authority, Treasure Coast Regional Planning Council, Southeast Regional Partnership Seven Counties /50 Years, Palm Beach County, the Palm Beach Country Metropolitan Planning Organization and has a pending site plan application for approval by the City of West Palm Beach.  In addition, many other national and local organizations have supported and endorsed Transit Village including the American Architectural Foundation and its Sustainable Cities Design Academy, the Urban Land Institute, the Northwest Community Consortium, Inc. as well as numerous other civic and private supporters.

Connecting to Create a Sense of Place and Innovation

Invigorating and Sustainable Strategies to be implemented in West Palm Beach

Transit Village will embrace sustainable strategies (having already been selected in 2014 by the American Architectural Foundation and its’ Sustainable Cities Design Academy) and best practices to generate economic growth, encourage livable communities and preserve environmental resources, including remediating a contaminated Brownfield site (having already been approved by the Florida Department of Environmental Protection for partnering with them under a State Brownfield Remediation Agreement). Transit Village’s components encourage and support job creation and include the provision of workforce housing, commercial office, neighborhood and transit supportive retail space, as well as civic and community activities, all of which will be supported by mass transportation and pedestrian systems that will create and complete a desirable urban environment in downtown West Palm Beach.

By reinforcing existing street axes and views, strengthening the urban fabric, and creating a vibrant and connected neighborhood, Transit Village completes the western edge of the city’s historic downtown. These strategies, including minimizing downtown traffic by the creation of a “park-once” environment west of the CSX railroad tracks while promoting pedestrian connections to the east side. The mixed uses planned for the Transit Village will stimulate growth, facilitate bringing new and returning visitors to the Downtown during the work week as well as on weekends and holidays, enabling Transit Village to truly be a place where people of all walks of life – adults and seniors, families, schoolchildren and students — can “come * Live / Work / Play / Learn * go.” The plan presents a balanced, yet distinguished development that will catalyze additional growth and inspire innovation. As the center for a livable, walkable urban environment, Transit Village will be not just a destination, but a distinguished destination of choice. 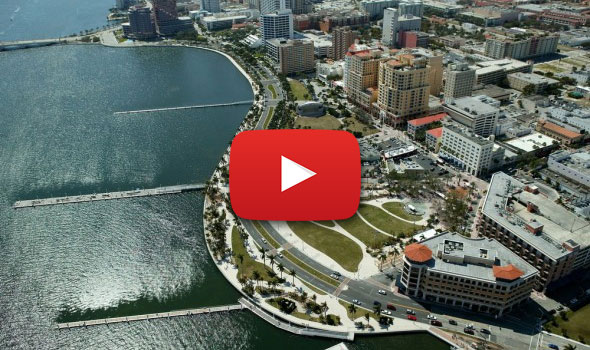 West Palm Beach includes many positive attributes, highlighting it as a great place for business investment. This new video captures all that Downtown West Palm Beach has to offer.